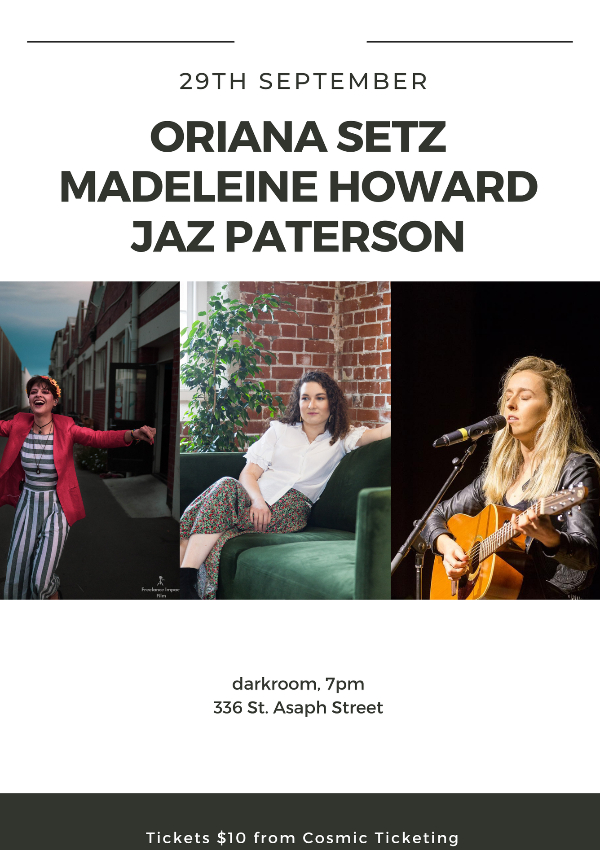 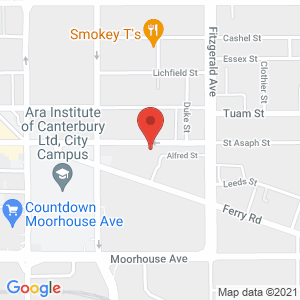 An all Female Singer Songwriter Evening

Join us at darkroom on Wednesday the 29th of September from 7pm for an evening of local music with an all female line up, featuring Oriana Setz, Madeleine Howard and Jaz Paterson.

Oriana Setz is a entrepreneurial multidisciplinary artist and Indie Folk singer-songwriter from Ecuador based on NZ since 2019. Oriana's poetic and raw bilingual lyrics, her colourful voice and refined compositions bring empowerment and healing to her listeners transcending language and cultural barriers.

The 26 year old artist is an Otago University Music School graduate, but it wasn’t until she relocated to Christchurch that she got serious about music. In 2018 she was accepted into the Artist Development Programme at SOLE Music Academy.  Under the mentorship of neo-soul artist Sacha Vee and Will McGillivray (nomad,) Madeleine developed her songwriting skills and fine tuned her artistic image.

Her debut EP Just Reaching Out was the result of all her hard work, produced by McGillivray and released in August 2020 to critical acclaim (NZ Musician, Muzic.net.nz.) Her debut single No More was selected for NZ On Air’s New Tracks compilation in May 2020 and her cover of Ladyhawke’s My Delirium made the top 20 in a national kiwi cover competition with RNZ. With 5 star reviews and opening slots for local artists such as Looking For Alaska, Madeleine Howard is one to watch as she emerges into the New Zealand music scene.

Jaz Paterson is a pop artist based in Christchurch. She has been a semi finalist in the international songwriting competition and finalist in Olympic songwriting competition. Recent highlights for Jaz have included performing at NY Edge 2021. Her collaboration "Horizon" with Shli has been added to local radio playlists. Jaz's vocal style is similar to Banks and Tove Lo. Jaz enjoys mixing electronic pop sounds with live instruments. Jaz has recorded her debut EP and is looking forward to its release this November, preceded by the release of several singles over the coming months

An all Female Singer Songwriter Evening